You are here:
Destination: Adulthood 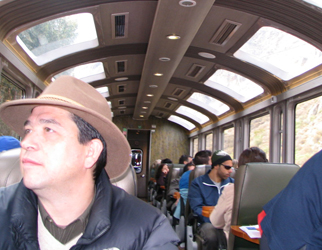 I was traveling on a train in another country when it turned out that a young couple from Arizona sat next to me. We exchanged greetings and sort of established ourselves with each other. They both work for Whole Foods, Inc. They liked what most would consider to be exotic travel. They plan to retire in an affordable, foreign country. And they were obviously not married.

This lovely woman, Christina, sounded close to her mother and her stepfather, Dave. He is like her father, she offered. But he’s not you’re father, I suggested. She struggled with this a bit and said, “I call him Dave. I’ve always just called him Dave. But he’s been good for us–he’s a parent.”

Christina offered something even more personal: At the age of six she testified in court during her parents’ divorce privately in the judge’s chambers. She told the judge which parent she preferred to live with; her mother, obviously. It’s remarkable, I said, that she even remembers this occasion. I asked Christina whether at six she could even be aware of what she was doing. “Oh, no,” she responded, “like it was yesterday; I can tell you what the room looked like.”

Looking squarely at me, she explained that her father’s family–not her father–was fighting for joint custody. And, I chimed in, you had to show the court that your mother wasn’t influencing you, right? “Yes, exactly,” she said; “I had to help my mother”. A momentary pause on my part, imagining a child in the first grade stepping up to the plate in a divorce proceeding. I also thought about her free, but fringe, spirit and wondered what part her parents’ divorce might have played in this. But I only said, you grew up very fast. She laughed a bit and replied, “Everyone tells me that.”